The Exercise HarbourEx15 is a follow up on the south harbour report which also formed the basis for the choice of scenario and exercise site. A DSB study shows a complex picture of the risks and Sydhavna (south harbour) is an area with many different actors and activities located within a limited geographic area.

HarbourEx15 is part of the EU’s exercise program and the exercise involved, in addition to some 30 national emergency resources also some international rescue resources. 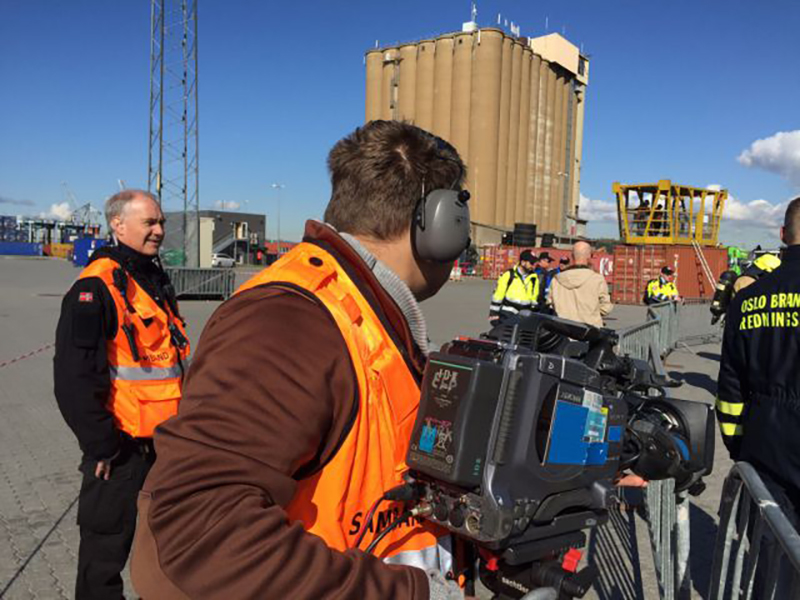 A Crew from NRRL Sambandstjenesten broadcasting live from the exercise. Photo: LB1JG Arnfinn

Scenario I – an explosive fire in the tank facilities at Sydhavna

An explosive fire occurs in the container terminal. Several of the vessels involved in the accident include unknown hazardous substances. The fire is exploding and spreading to oil tanks adjacent to the container terminal where it causes major damage to the facilities and starts a prolonged fire that potentially will last for 3-4 days.

Scenario II – evacuation of the public in non-affected areas

Large quantities of smoke caused by the fire at the oil tanks are creating major problems for the local population, in addition to preventing the flow of traffic on both roads and railways.

A ship ship collision in the Oslofjord, just outside Sydhavna causes a discharge of bunker oil from the vessels involved in the inner Oslo Fjord.

NRRL Sambandstjenesten contributed with live transmission of TV images from the exercise area and into Oslo City Hall where exercise management was located. In addition, the images also were displayed in the Presidency Room of the City Hall, where visitors and guests were informed about the exercise. In the Presidency hall there were also shown live images from distaff (exercise management).

The most exciting images were delivered from exercise areas on Sjursøya and Grønlia. From the exercise areas the images was sent via the link on Kongshavn high school and into the City Hall. The greatest challenge was on day 2 where we would cover the ship collision. To get the best possible pictures one of the cameras standing on the shore, while the second camera was on board rescue boat. This gave very good pictures to the exercise management.

In the second weekend in March it was time for festival featuring World Cup in Holmenkollen. Among the thousands of volunteers were 13 radio amateurs from Oslo Group. The radio amateurs were responsible for tracking medical resources, communication network for the jumping competition and operation of  the healthcare communications center with a radio operator and a logger. When we started in middle school we become more students in our class. A handful of students from Veblungsnes joined our class. To build a good environment in the class we went on winter camp to Skihytta in Skorgedalen.

The purpose of the Radio Day's Field Day is to promote recruitment of new radio amateurs and to strengthen the cooperation between Norwegian radio amateurs. This year, the Oslo group had its Field Day at Bygdøy Sjøbad.

Pictures from the opera

Pictures from the opera in Bjørvika, Oslo. Photos taken from TAP Air Portugal's route 513 Oslo-Copenhagen and route 514 Copenhagen-Oslo.
Copyright © 2002 - 2022 Stagnes.eu. All content is copyrighted. That means you can not copy text, images or other content without prior permission.